Logo: On a black background, we see the following words:

Music/Sounds: A female voiceover saying, "This is SEBC, the Secosan Broadcasting Corporation."

Availability: Extremely rare, as shows from this era are no longer reran on Secosan television.

Scare factor: Low. This was meant to be a placeholder logo for the next logo.

all in white. Below each of those letters is a single line divided into four segments. Each segment is long enough to contain the letters. The logo was designed by the Arthouse Graphic Studio in Warthon.

Cheesy factor: The logo's animation is choppy. Did I also mention that the synth tune can get creepy?

Music/Sounds: Same as before, except it is accompanied by a four-note synth tune. On some shows, such as Open Oppurtunities, the logo is silent.

Availability: Common. Intact on almost every episode of the first nine seasons of Open Oppurtunities. Other shows that had this logo include Weton House, Crooked Detectives, and the first two seasons of Good Morning Secosa.

Logo: On a black background, we see a bunch of colors shine onto the screen, from left to right: red, orange, yellow, bright green, teal, blue, violet, light pink, and magenta. Eventually, the rainbow disappears to make room for the words "In Colour." Following this text, the SEBC lines from before show up, looking like this:

The logo then cuts to black.

Music/Sounds: A bombastic fanfare orchestrated by Emma Salgasia. On Open Oppurtunities, the logo is silent. 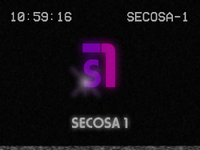 After the logo is formed, the letters SECOSA 1 glow on-screen.

Availability: Common. Preserved on almost every Secosa 1 show from the era, such as Polsia's Journey, the first two seasons of The Shebenas, Dolwicheña, seasons 8-14 of Let's Play Spinball, the short-lived Bh. 100,000 Pyramid, Dashipiano, Morg 31 prior to season nine, Polsia's Journey, and other programs. However, many of these shows just had the still version at the end, or the logo itself plastered over the closing credits. For the ident itself, it is extremely rare, as it was only shown in the beginning.

Retrieved from "https://novasecosa.fandom.com/wiki/Secosa_1/Logo_History?oldid=5820"
Community content is available under CC-BY-SA unless otherwise noted.